Insider  >  Macro Moves  >  What are the reasons behind the downfall of Air India?
Macro Moves 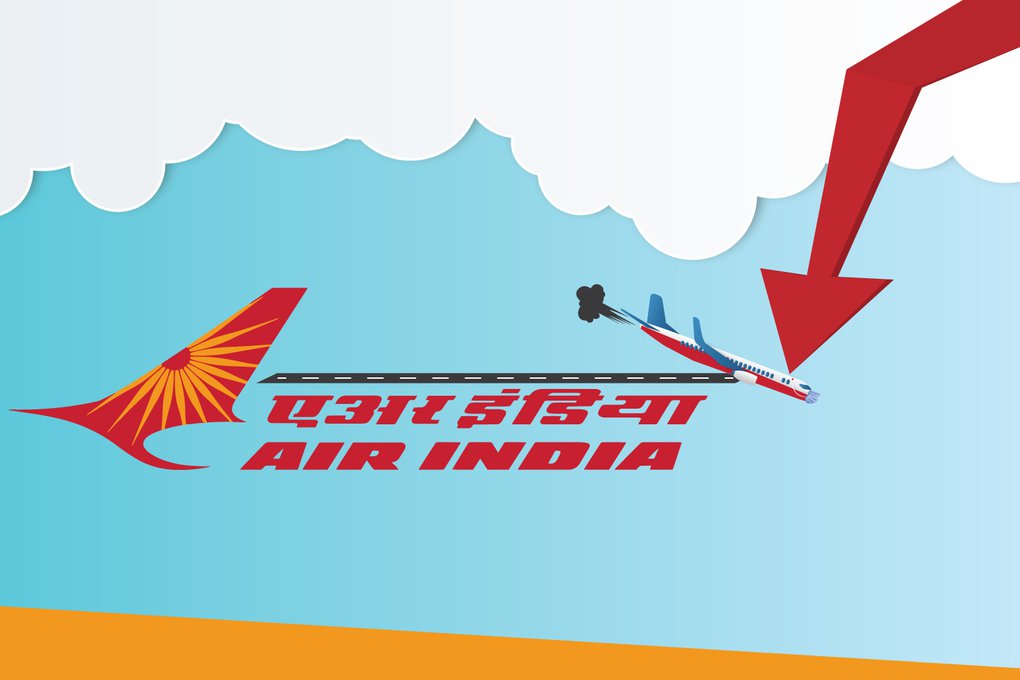 When you are erecting a castle or a building, it is not the building that matters. But the pillars that hold them up matters the most. Any mistake in the construction of the pillar will simply make the building weak. Similarly, in a business, every decision taken is like constructing the pillar. These pillars are going to bear the entire Empire and small mistakes can be a plot for its end. The story of Air India can be observed along the same line.  A few blunders, which were a part of its history fated Air India’s downfall.

Air India involved in an acquisition spree in the early years. Nearly 111 aircraft were brought for a sum of 70,000 Crore. The government was planning to fuel the acquisition by way of debts, which will be then met by the revenue earned. But things happened the other way around. They came up with another plan wherein the airline was merged with Indian airlines. The move was aimed at increasing the synergy. However, despite the numerous efforts to jump out of losses, the airline only fell deeper and deeper into it. Equity of 48,212 crores was also introduced to deal with the losses. In the later years, it turned to be an add-on to the already carrying burden. The government couldn’t meet up with the annual interest payment obligations. Hence Air India was forced to see a loss of roughly 52000 crores.

Alongside the debts kept climbing in the balance sheet. Air India and Indian Airlines together showed a debt of 2000 crores. It also exhausted the turnaround fund which was injected to meet the operating costs. Another disastrous move was selling of 5 Boeing 777-200 below the estimated price to Etihad which made Air India incur a loss of 671 crores following the deal. In 2012 it was declared that the losses will be met with the help of taxpayer’s money.

While all this is on one side the increasing fuel costs started thinning the profit margin. Employee expenses, insurance, and retirement also contributed to the already increasing costs. Currently, the debit column of Air India holds $7.5 billion in its account. As per experts, this will grow in the future if the current situation continues mounting to a further loss of $1.5-2 billion in the next financial year.  All this pushed the government towards the disinvestment plan, a plan which had to be taken well before.

The government planned to sell a 100% stake in Air India. The process started in January this month. The government was hoping to find a potential buyer by early March.

But the entry of pandemic turned the entire situation upside-down only to block the road further. Covid-19 hit the entire aviation industry leaving major players like American Airlines, Luftansa, and all others even remotely connected with the airline industry all hurt and bruised. It also caused a major impact on Air India's disinvestment plan. The Maharaja sustained a $500-600 million loss this quarter. Following this, the CAPA extended the deadline for submission of Expression Of Interest (EOI) till April 30.

However, in the current scenario, no one will be coming forward to buy Air India. Because they are having a hard time dealing with the pandemic. Though Tatas are interested in it, a single bidder will not make the deal a healthy one.  Hence, the government has planned to wait for market sentiments to improve. Until then the airline will be funded with a $300-400 million to meet its interim operating requirements.

Though there are numerous drawbacks which can be pointed out, the airline stands tall both in the international and national markets. It holds a market share of 12.3% in the domestic market and 42.8% in the international market. This happens to be a highly attractive factor. All matters relating to the future of disinvestment seems to be unpredictable and obscure at the moment. A clear action plan can be expected from the government only when the Covid-19 tsunami has eased.