The J-Curve Effect: An Overview Every theory in economics provides a rational approach towards decision-making with a number of curves & graphs. Economics is incomplete without a graphical illustration starting from demand curve to yield curve and what not!

You must have heard about the U-shaped curve. Likewise is the J-curve, shaped like its name. Here, the line first falls and then gradually starts rising and keeps rising above the starting point.

Eager to learn all about this? Let's take a look!

J-curve is a graphical representation depicting an initial loss followed by gains that surpassed the starting point in long-term taking the shape of the same alphabet.

In other words, we may deduce that there is an Early Loss followed by a Greater Gain--this states that things will go down before they get into the right phase.

Thus, J-Curve works in these phases:

1. The Initial Loss Phase - The negative return phase when only investment is taking place without any payback.

2. The Breakeven Phase - In this phase, the curve reaches a point that is equal to the investment.

3. The Dramatic Gain Phase - The phase where the curve surpasses the initial investments and reaches the stage of absolute returns.

In an economic sense, the theory complements the Balance of Payments. When the currency is devalued, the trade deficit will initially worsen and eventually improve in the long term.

Ya, we know, that was a little too much of high-school macroeconomics! But wait, as we said earlier, J-curve has its relevance in a number of domains.

It represents the scenario that initially, the fund poses negative returns, but with time, it will provide higher positive returns. Private equity investments are typically riskier than other types of investments. As a result, it is predicted that there would be negative returns in the beginning. Some amount will also be invested in order to generate good returns at a larger horizon.

In the starting stages of the investment, private equity investment has very little or no cash, which is also used to decrease the company’s debt. Later on, the excess cash flows will be paid to the equity investors in the form of returns.

If the curve is steep, the fund will generate positive returns sooner and create more significant returns in a shorter period. If the increase in returns is slow, it indicates that the fund is not being managed effectively and that more time is needed to achieve positive returns.

Balance of trade is the net value of imports & exports of goods, services, and investments of a country. So, the J-curve results from the effects on the Balance of Trade when the currency in the economy is devalued.

Devaluation of currency makes the import costlier and exports cheaper. In the short run, demand is inelastic, i.e., even when the imports become costlier, the volume remains the same, but after a while, the balance of trade will deteriorate. There will be a drain in the current account balance leading to a smaller surplus or a more significant deficit.

As time passes, demand will become more elastic, and the balance of trade will start improving, forming the J-Curve. Finally!

But sometimes, this concept does not work instantly as importers and exporters hold binding agreements to deliver the commodities in the future. So, even when the currency depreciates and irrespective of foreign currency exchange rates, the exporters and importers will conduct the trade as decided earlier. (Sighs) So, have you realized how the J-curve depends on multiple factors! One of the essential factors that one should consider while understanding the J-Curve is the impact of greater price elasticity in the long term.

Before we dive deeper into it, let’s understand the reasons that justify price elasticity to be more in the long run.

Reasons for more Price Elasticity in the long-term

Want to know why price elasticity takes place in the long run, Here's why:

Role of the Marshall-Lerner Condition

This condition simply states that Currency Devaluation will improve the Balance of Payments only when the sum of demand elasticity for imports & exports is greater than 1. It is also suggested that the Marshall-Lerner condition holds relevance only in the medium and long term. This is why the J-curve also forms in the medium to long term.

In short, According to the J-curve effect, following a currency devaluation, the current account balance will first decline for some time before rising as predicted.

The shape of the J-curve may differ depending on the situation.

There are multiple factors that contribute to its shape. Some of them are as follows:

The J-curve can be entirely or partially mitigated by Investing in the Diversified Portfolio. This way, it gets benefited in all kinds of market conditions and investing for different time spans. (We love loopholes!)

This will also provide liquidity to the funds. The fund manager must modify the portfolio according to the changing environment to reduce the downside risk and formulate a stabilized portfolio.

In the world of finance, things revolve so much around the growth and future prospects of a business & J-curve is a beautiful concept to learn how initial losses don’t matter when we tie our laces for the long run!

A J-curve represents a trend that is initiated with a serious drop and ends up with a dramatic rise. The journey between this uncertain drop and rise represents the growth in the field for which we are considering it.

Isn't it amazing how this trendline is observed in so many fields? Hope you understood how it works and the kind of effects it carries. Do you know any other applications of J-curve? Tell us in the comment box as knowledge increases by sharing.  That’s it for today. Happy Learning! How Chinese Investment in India is Dominating Tech Space 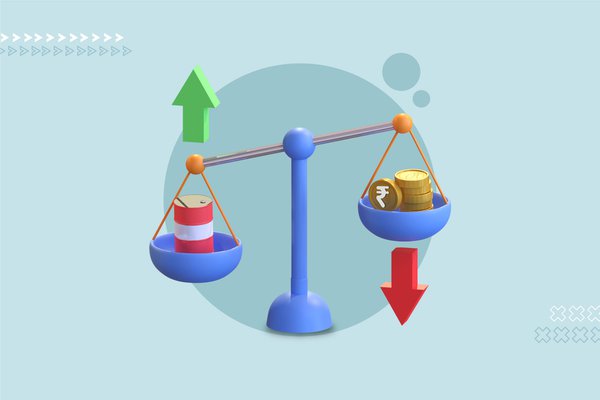