The crypto frenzy is not ending anytime soon. Every now and then, a cryptocurrency emerges out of thin air! And this time, it’s a multi-bagger from India!

Presenting before you - Polygon. Recently, this cryptocurrency hit the news for having received investment from US billionaire entrepreneur Mark Cuban. What’s more, in the last month itself, its value has risen by a whopping 120%! And to everyone’s surprise, it even outperformed most of the cryptocurrencies last week, even Bitcoin!

So, we had to talk about this. Wanna know its astonishing journey? Let's get started.

What is Polygon Crypto?

Founded in 2017, it is a cryptocurrency that powers the Polygon Network, a multichain scaling solution for Ethereum. And our fellow countrymen made it a reality. Jaynti Kanani, Sandeep Nailwal, and Anurag Arjun are the co-founders of the network.

The idea behind it was to solve the problem of high transaction fees and the slower speed. After all, saving money is the priority for any Indian. Anyways, Polygon is based on the Ethereum network. But it uses the Layer 2 sidechain besides the main chain. Hence, it allows the users to develop applications at a much lower cost. You can call Polygon an efficient alternative to Ethereum.

Sandeep Nailwal hails from Delhi. After his education, he pursued a stint at Deloitte. But he broke the stereotype and entered the breathtaking world of blockchain. The other co-founders were engaged in programming as well. That is why they were able to develop a cryptocurrency and a blockchain platform.

The idea came to their minds in 2017. Initially, they developed a crypto called Matic (later rebranded as ‘Polygon’). Considering the tremendous potential, they incorporated a company and raised funds from their acquaintances. Afterwards, they raised $5 Million through Initial Exchange Offering with Binance.

In 2019, they were valued at $26 Million. Now the valuation has crossed $14 Billion! More than 530x returns in just two years! Pretty immense, right? Even at 85% below its all-time high, it is the 17th biggest cryptocurrency in the world! And its owners - India's first Crypto Billionaires! That’s no easy feat.

Why is Polygon crypto creating so much hype?

You will be amazed to know that Polygon grew by 35% in June 2021. They outperformed the majority of the cryptos, including Bitcoin! It looks like even Elon Musk couldn’t do anything to boost his favorite cryptos this time.

But it is unnatural to witness such massive growth. If you wonder how it happened, here’s help:

In stock markets, we see that the share price rises to the roof when there is positive news. It is due to the bullish sentiments of the investors. Similarly, Matic announced a rebranding to Polygon. Also, they were able to provide a more effective blockchain network for projects. It was such that it has become compatible with Ethereum Virtual Machine (EVM) and Proof of Stake or PoS. (In case you don’t know, PoS is a mechanism through which the power to mine or validate transactions depends on the quantity of the crypto held).

These advancements have strengthened the fundamentals and boosted the market sentiment. It created hype among the crypto miners for the blockchain. Even the VORTECSTM Score (owned by Cointelegraph) has shown bullish indicators for the price of Polygon crypto.

The above advancements created hype for the blockchain. But the founders didn't stop here. In addition, they also announced that they had integrated the database with Google Cloud's BigQuery. It means that you can analyze the datasets and get valuable insights through the Google BigQuery platform. It will help the developers with improved access to Polygon's datasets.

Does the above paragraph seem technical? Worry not. We've got you covered. For a layman, it means that the users will get improved access to the blockchain. It will also help to facilitate data analysis.

If you have watched Shark Tank, there's no way you don't know Mark Cuban. In case you haven't watched it, he is an American entrepreneur. He has become a billionaire by investing in 'Shark Tank' companies. For basketball enthusiasts, he is no less than a celebrity. He owns the Dallas Mavericks, which competes in the National Basketball Association (NBA).

Recently, Cuban has invested an undisclosed sum into Polygon. He also appreciated the crypto, which spread like fire. It made Decentralised Finance (DeFi) investors optimistic about Polygon. And the crypto started getting support from various groups of the crypto world.

Can Polygon crypto compete with Bitcoin?

After looking at the hype, millennials don't give a second thought before investing. But you should ask: Is Polygon worth the hype? Can it overtake Bitcoin? The answer is: Yes and Yes (maybe). It is an emerging crypto, which even surpasses Bitcoin in some aspects. Here are some reasons why:

Bitcoin uses a proof of work technology, which requires complex calculations and computing power. Due to this, massive electricity is consumed in the process. Hence, bitcoin isn't 'environment-friendly.'

But that is not the case with Polygon. As mentioned above, it uses proof of stake. So, there is no requirement for vast computing power. Thus, there is a significant reduction in energy consumption.

In proof of work, the transactions have to be validated by most of the network. It means that miners having 51% mining power can decide whether to approve a transaction. It is next to impossible and thus believed to be secured. Imagine what will happen if a person can acquire the required quantity? He can control Bitcoin.

But the proof of stake used in Polygon takes the security to the next level. Here, you have to own at least 66% of the mining power to validate the transactions. So, an attempt to take over may cost the investor to lose even his current holdings.

Rather than being restricted to a particular chain, Polygon works as a network of interconnected blockchains. It means that there is no limitation to stick to a single blockchain. Besides, it also has sidechains. Here, developers can develop their applications and Non-Fungible Tokens. It enables an opportunity for the artists to get an extensive marketplace for their products. 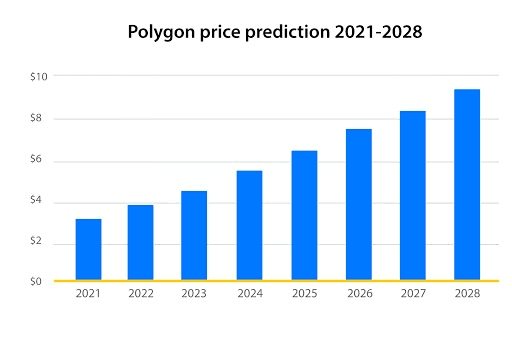 Although crypto is the future, it is not free from caveats. But Polygon is trying to be the best. With its advanced features, it has become successful to some extent. That is why there was a rally in its price. But it has a long way to go, considering the constant technological advancements.

And, that’s why it’s always advisable to do your own research and evaluate if an investment avenue fits your objectives. Cryptocurrencies are certainly not for the faint-hearted. You must not take for granted the speculative property of these assets. Remember - Invest in what you know.

Anyway, what’s your opinion on the future of Polygon? Let us know in the comments below. Best IT Stocks in India 2023: Should You Invest?