There has been a lot of fuss in the markets concerning vaccines. And people aren't much aware. So, today, we'll make things clear for you.

With the approval of Sputnik V, it has become the 3rd vaccine candidate in India's vaccination drive. It is a 'masterstroke' by the government, considering the acute shortage of vaccines in the country. But it has led to confusion among people on which vaccine to take. Are you one of them? If yes, don't worry. We've got you covered.

Going ahead, there will be three vaccines in circulation: Bharat Biotech's Covaxin, SII's Covishield and Sputnik V. In this vaccination season, people are willing to go the extra mile to grab one of these doses. If you aren't sure which one you should opt for, provided you're given a chance to choose, here is your ultimate guide.

In this article, you'll get to know what differentiates the three vaccines and which of them is actually apt for you.

Developed by Bharat Biotech in collaboration with ICMR, it is the first indigenous vaccine to fight against Covid-19.

It is developed using 'Whole-Virion Inactivated Vero Cell' technology. Pretty fancy name, right? In simple words, they contain inactive cells or dead coronavirus cells. It doesn't infect people. Still, it can boost their immunity against infection. This method is a popular and established technology to develop the vaccine. So, Bharat Biotech took the easy route, rather than experimenting in the uncharted territory.

These vaccines can be stored in 2-8°C. As it is made in India, it is only natural that it is stored as per the available facilities. After all, what is the point of manufacturing the vaccines if we can't even preserve them properly? Hmm?

Also, most of you would know that it is a 2-dose vaccine. And the time gap between the doses is 28 days.

If you recall, the efficiency rate of Covaxin was 81% in the 3rd phase. From 81% efficiency to effectiveness against the constantly changing mutations of coronavirus, it has indeed come a long way. That's the reason why it is accepted globally as well.

But it doesn't mean that the vaccine is free from side effects. It has mild symptoms like pain at the injection site, headache and body ache, fever, cold, and cough. In some cases, it may also lead to vomiting and pain. In case you have got vaccinated recently and face these symptoms, don't panic. You are not the only one going through this. Have faith.

Developed by Oxford and AstraZeneca, this vaccine is manufactured by the Serum Institute of India (SII). Yes, the same SII whose CEO received various death threats from his fellow countrymen, whom he saved. It forced him to flee to the United Kingdom.

Anyway, it is a viral vector vaccine. It means that a modified and less harmful version of the coronavirus will be injected to build immunity against the real deal. Don't worry; you won't become Covid positive by taking this vaccine.

Like Covaxin, it is a 2-dose vaccine. But the time gap between the doses is relatively longer as compared to the Bharat Biotech's vaccine. It is for 12 to 16 weeks. So, you have to be more patient in case you were injected with Covishield in the first dose. Like all vaccines, it too has some common side effects. They include pain, fever, body ache, dizziness, etc.

In the phase 3 trials, it had an effectiveness rate of 90%. So, it proved to be more effective than Covaxin. That is why people preferred it over the other vaccine initially. But the birth of the double mutant changed everything. People who had originally decided to take Covishield switched their minds and went crazy after Covaxin, even when Covishield proved to be equally effective against the virus. So, there you are.

Anyway, we bet (most of) you don't know this:

Usually, we have a preconceived notion that foreign goods flare better than Indian goods. It may be true in some cases where their technology is superior to ours. But this may not necessarily hold true in the case of vaccines.

Developed in Russia, Sputnik V is the world's first registered vaccine. But it doesn't guarantee that it's the best. (FYI, V in Sputnik V is the English alphabet, which means vaccine. It is not the roman numeral V).

Anyway, it is also a viral vector vaccine, like Covishield. It is stored between 2 and 8°C. So, India won't have any problem storing and transporting it.

And just like the Indian vaccine candidates, this is also a 2-dose vaccine. But it has the shortest time gap between the doses. The period is just 21 days. It is so because two different formulas are used to boost immunity. While other vaccines use the same version twice. It leads to a more effective and long-lasting solution.

What's more, the efficiency of this vaccine is a massive 91.6% in the later trials. This figure has led to 60 countries approving this vaccine for use in their countries. You may think that it may have more side effects, as it is more effective. But that is not the case. It has common side effects, as mentioned earlier.

But here's the catch, its supply in India will be limited these days as India has received only 1.5 Lakh doses on 1st May. So, you can't expect it to be available everywhere, can you?

In case you didn't bother to read the entire blog, here's a quick snapshot of the three vaccines:

After reading about various vaccines, you might be confused about which vaccine to take. Remember one thing: all of them serve the same purpose and are capable enough to fulfil it. Although they have different time gaps between 2 doses, it should not become the deciding factor.

But there is something you need to take note of. Don't be foolish enough to get yourself vaccinated if you are Covid positive or have its symptoms. You may spread the virus to others at the vaccination centre. By that, you'll risk your own life as well. All of this will only add to the problem of the country as a whole.

These are testing times, we mean, both literally and figuratively. It's important that you don't lose your nerve and stay calm. Following the precautions is the only thing you need to do. That'll keep you and your acquaintances safe.

So, stay home, wear masks and get vaccinated. Rossari Biotech IPO: The things you must know! 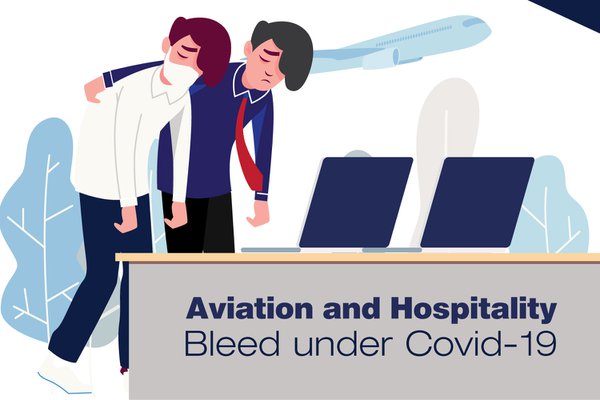 How hard is the Bollywood industry hit by the COVID-19