Okay, I know the new words messed the song up, but it’s true! India is home to many companies that have shaped the lives of many Indians on a very personal level. One such “revolutionary company” is Amul. And when I say revolutionary, I mean it in a very nationalist and Indian independence favouring way. It wasn’t just a “new business idea”- it was revolutionary.

The company that gave us “The Taste of India” and “Utterly Butterly Delicious” comes from a period of pre-independent India. Let us learn a bit about what Amul was, before getting to what it is.

Before Amul came into existence when India was under British Raj, there was a British company called Polson’s engaged in the dairy business. Polson’s had turned into a bully of sorts due to certain reasons.

This “bully” status was gained because Polson’s was a British company in a British-occupied country (chacha Viceroy hai hamare). Nobody wanted to compete with the “big bad British company,” so Polson’s had no competition. Because of this, it became a monopoly in the dairy industry.

This position held by Polson’s caused great distress to both the producers and consumers of milk and milk products. First came the producers; if they wanted to sell any surplus milk, they couldn’t do it themselves.

Opening a business on their own was not an option as it wasn’t feasible. The producers needed a business to act as a distribution channel, and they were left with only Polson’s. As for the consumers, to purchase any dairy product, they could only buy from Polson’s as no other companies engaged in the business.

What these two situations meant for Polson’s, was that they could buy milk from the producers for very low prices and sell to the consumers at whatever price they liked. Polson’s needed to be taken down a few notches. But a farmer alone couldn’t do it.

Kaira District Co-operative Milk Producers' Union Limited (KDCMPUL) was the name of the cooperative that was formed. Under KDCMPUL, the milk producers gained great autonomy. Milk was sold at a price that was both beneficial to the producers and fair to the consumers. The Indian demographic has great use for milk, not only for direct consumption but even in various forms as for both sweet and savory preparations.

With more favourable pricing, consumers could purchase milk for these various purposes, and the dairy industry’s future looked like it had some potential for growth. As for Polson’s, the farmers hitting their stride almost drove the British company out of business. The dairy business had to switch to tanning and leather as KDCMPUL had taken back its cash cow (get it?😏).

With Polson’s out of business, the farmers had sent a clear message; they weren’t ones to be pushed around. But the Brits had to try their luck, and multiple efforts at “negotiations” were made to the farmers now joining forces. But the farmers were no sellouts.

With the birth of KDCMPUL, India witnessed the emergence of multiple cooperatives, each formed with the same goal to serve and benefit the farmers involved in them. But this new growth also introduced a new threat.

When Polson’s practiced its monopoly, the various cooperatives had a common enemy that they joined forces against. With this common enemy gone, the newly formed unions were exposed to the threat of in-fighting or competition among the existing businesses.

Then, in 1970, Dr. Verghese Kurien, an entrepreneur intent on solving the bigger social problems, came up with a “billion-litre idea” called “Operation Flood”. The aim of this operation; to unite the multiple cooperatives together under a single unit to help improve their business. To fulfill this mission, a new cooperative body called the Gujarat Cooperative Milk Marketing Federation Limited (GCMMF) was formed. GCMMF brought KDCMPUL and many other cooperatives together to turn the fragmented milk industry in Gujarat into a single company, Amul.

The big bad villain is defeated, the hero has a new form, seems like a happy ending, right? Well, Amul had just formed and it was still very far from the monumental status it holds in India. So how did it get here?

For starters, a big factor that kept Amul as the people’s brand is the fact that their favour to the farmers wasn’t just a one-and-done deal. Even after the end of British rule, Amul kept the benefit of farmers at the forefront of its actions.

While most companies lose about 30% of their turnover to various costs, Amul’s costs stay at a peachy 20% owing to a very efficient supply chain that works from the ground up. The remaining 80% is not just consumed by Amul to grow as a business, but also to help improve the conditions of dairy farmers, irrespective of their association with Amul.

Wondering how Amul accomplishes such low costs? Don’t worry, I got you. This dairy diggaj manages to cut costs by employing a very efficient delivery chain for milk and its by-products. This distribution system goes something like this; milk is procured from the various farmers directly by Amul and distributed at the same level first.

At the first level, the demand for dairy is limited to milk, so little to no processing is required at this stage as most consumers either consume milk directly or use the milk to form other products like paneer, curd, etc. After this distribution, the milk goes to the next level.

At the next level or the district level, some processing is done to achieve milk with various fat levels, and some pre-packaged dairy products to meet this level’s demands. The remaining milk then moves on to the final distribution level called the state level, where the milk is most processed to form the largest variety of non-milk dairy products like cheese, yogurt, ice cream, etc., along with milk.

Using this distribution model, Amul primarily removes middlemen that are the biggest source of costs incurred by any company. On top of this, Amul also reduces wasted production by catering to the demands of various levels from the ground level going up, instead of mass-producing first and trying to sell those products aggressively.

As for the farmers, they don’t just get love from Amul; they love Amul back. An anecdote that supports this statement is the case of the movie Manthan. Shyam Benegal wanted to make a movie depicting the story of Amul but lacked the funds to do so. So Dr. Verghese Kurien asked each of his 5 lakh strong army of farmers to contribute just ₹2 to this cause to help fund the film. 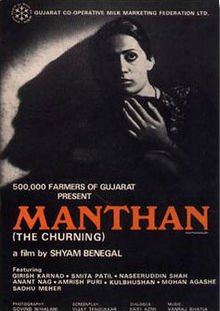 But a film made is only half the job because every film needs an audience to succeed. Well, the farmers mentioned earlier came in as saviours. The farmers visited theatres by truckloads to watch “their film,” and Manthan survived the production and post-production process, thanks in part to Amul.

Amul’s business model was so effective that at one point, then-prime minister Lal Bahadur Shastri visited and stayed the night with the farmers working with Amul. And he was so impressed by how the business functioned that he set off the creation of the National Dairy Development Board to replicate Amul and its success in Gujarat on a national scale.

With dudh lane gaye, aur chheekte hue aaye being a fatal risk, people weren’t too keen to leave their houses, not even to buy essentials (thanks Covid-19 😑). With this ongoing pandemic, other companies were scrambling to stay in business by cutting costs and staying dormant due to reduced sales.

Amul had a different idea; it increased its spending on advertising and marketing. They also increased the production of its packaged and non-perishable products (biscuits, milk powder, etc.) in response to the increased demand for products with longer shelf life.

India is a country where cows are revered as mothers. Amul empowered this mother and turned her into a working, earning one that nurtures and supports the lives of over 3.4 million farmers engaged with the brand. Amul’s success is powered by the people because it is a brand of the people that works for the people.

For another story of a smart business succeeding with wits, read Club Mahindra: Holiday or a Trap? How India can replace China as World’s Manufacturing Hub