How Colgate made you an Addict I remember the simpler times back in 1st standard, when I would be easily excited by something as plain as a small tube of toothpaste, a toothbrush, and some stickers handed out to me by young men and women in white lab coats.

For the longest time, I thought every person my age experienced this phenomenon. This belief was challenged only when an argument with my colleague led me to find that she never had a similar experience.

While absenteeism seemed to be the reason for the disparity in our experiences, the simple memory was, in reality, a marketing campaign from Colgate. While young me was overjoyed with the brand new merch (again, simpler times, plus I was a dumb kid🤷‍♂️), my parents saw a different picture.

As the purchasing consumers, they were exposed to Colgate as the brand of toothpaste that their child would favour.

This “favour” meant that brushing would be hassle-free and something I didn’t need to be reminded to do, and let’s be honest, brushing really was a chore and a half at that age. This discussion also made me realize that people don’t talk about toothpaste often. No, seriously, when was the last time you had any meaningful conversation about your brushing habits.

The reason for this hush-hush about teeth isn’t prohibition but how commonplace toothpaste is. Nobody cares about what brand one uses, and the selection process is straightforward; you pick the easily available paste, so you don’t have to deal with changing taste too often.

But for Colgate, it is good that its toothpaste is so easily available and widely known, as a conversation could lead to a change in preferences, and Colgate doesn’t want that. But how did Colgate reach such notorious fame?

Today’s story is about the not so simple life and times of a company that makes a seemingly simple product, toothpaste, and toothbrushes.

Colgate as a business was formed in 1806 and incorporated in 1908 based in New York. To better understand Colgate’s present in India, we need a look at its past outside India.

A brief history of Colgate

Thus, by 1937, when Colgate first entered the Indian market, it had already gathered over a century’s worth of intel, operating on foreign grounds.

Here’s what the company learned and how they used this information.

Colgate didn’t have it easy following its entry into the Indian forum. Pre-existing Indian brands that knew the playing grounds wouldn’t make it easy for a foreign entrant. But how did Colgate thrive, and has been, since? Well, here’s Colgate’s business model since its touchdown in India.

On its entry to India, Colgate was met with stiff competition by Dabur. This brand had already established itself in India and was selling well because it was ayurvedic (and we all know that we Indians love us some Ayurveda). But the paste, had really poor taste. (ba-dum-tss + facepalm) Colgate turned this gustatory need into a driving point for its sales. Most toothpaste brands created what was basically an abrasive ointment for teeth.

But Colgate brought the revolutionary idea of “non-druggy tasting” toothpaste. All age groups could appreciate the better taste, but kids liked it the most. We’ve either been the kid or dealt with a kid that’s always fussy about brushing. Well, this problem has existed for a long time, and Colgate knew it could capitalize on this minor inconvenience. 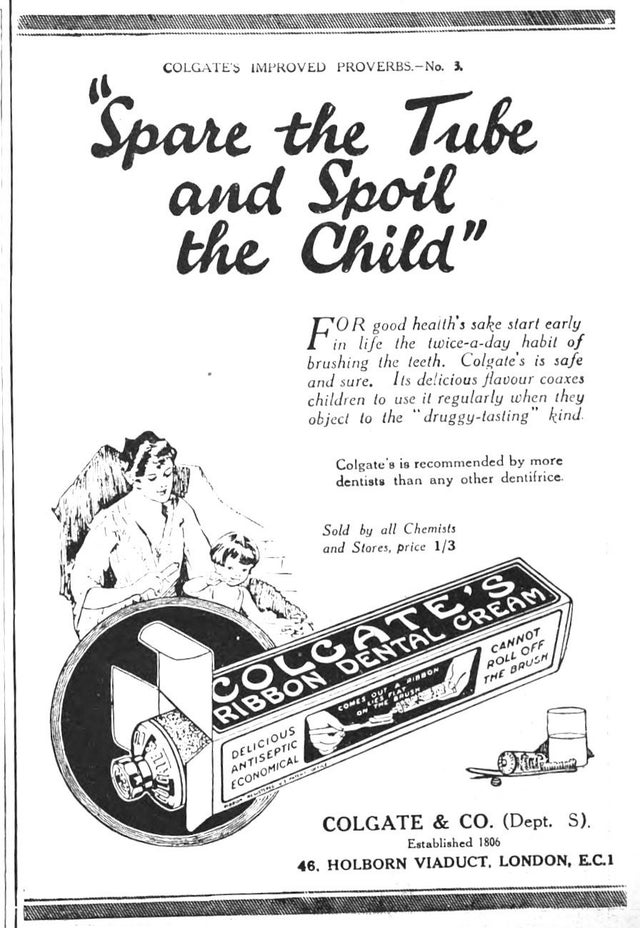 Colgate might have revolutionised toothpaste by changing its taste, but a revolution only becomes so when it is backed by the masses. A revolution is just a new, maybe a good idea without the masses. Thus, to rally the masses, Colgate had to do something. So they went to the most unlikely segment of its target demographic; young, schoolgoing children with no purchasing power. But the approach wasn’t aimed at them as much as through them.

The children were actually a medium to reach the actual buyers; the parents. The anecdotal tale in the intro to this blog wasn’t a sham but a real story, and so was the marketing strategy. With the Oral Health Month campaigns started in 2004, Colgate has regularly reached out to schools and dental hygienists alike to maintain a brand recall value as “the toothpaste brand that kids like.”

These visits had a rather beneficial but funny side effect brought to my attention by a superior when discussing the whole “toothbrush, toothpaste aur sticker mila” phenomenon. While the excited kids acted as messengers of Colgate to their parents, the unruly ones that might have thrown the tubes away acted as yet another marketing tool as the tubes strewn on the road would still expose people to the brand.

Advertising through waste, that’s a first.🤯

While Colgate’s been massively successful and well-reputed due to its generosity with its customers, the competitors get a much more uncompromising attitude. This is one thing it does that is pretty mischievous. Colgate is that one person in any group project who does none of the work but gets away with being greatly credited for presenting it well to the concerned audience; the person who gets all the laughs for retelling an unheard joke.

Colgate works smart and lets its competitors work hard. Colgate might have established its dominance in the toothpaste industry by taking out the major players with the taste benefit in India; that was about all the advantage it gave itself. Colgate had captured a significant market share and started playing the safe game with this benefit.

This safe game entailed Colgate partially giving up on market research. Having captured the majority market share, Colgate gave itself a nice cushioned lead that it wasn’t risking. Giving up on market research sounds a bit extreme and a little… stupid, doesn’t it? Well, that’s because it is, which is why Colgate only stopped engaging in the risky aspect of market research, i.e., experimenting with new products, trying new innovations. “But Colgate has a wide variety of products, how did they come to be?” you might ask.

This is where the group project metaphor becomes a reality. You see, Colgate’s peers in the toothpaste industry are often the innovators, as entrants in a niche segment or existing brand diversifying its product range. Colgate watches these competing products and their performance, picks a winning horse, and beats it at its race. Voila! And when Colgate enters the race, it’s in it to win it. Once Colgate sets its sight on a toothpaste type, it makes sure the customer ends up using only Colgate’s version of it; this goal is accomplished by:

Toothpaste as a product was very tunnelled as just “oral care.” However, oral care was not as simple as it appeared. Premiumisation means producing exclusive products of a subtype in the existing market. For the toothpaste product line, premiumisation meant the creation of toothpaste that catered to particular needs, such as; sensitivity, whitening, diabetic care, enamel care, etc. The potential for premiumisation existed, which would mean each player could give themself an edge to outperform their competitors.

Premiumisation=💲💲💲, right? Well… For a little bit, yes. There were two types of operations in terms of premiumisation.

The companies engaging in premiumisation enjoyed the benefit they earned because of the “new shiny” effect. But Colgate would tug the rugs from under them promptly before they gained too much influence. Colgate would achieve this with its better brand recognition and competitive pricing.

An economic moat is a competitive advantage that a company has over its competitors. Each player needed an edge as the toothpaste industry had multiple players with a wide variety of products. In the FMCG Industry, where Colgate is a big mogul, switching cost is not a moat or advantage companies can exercise very well.

Switching costs are the monetary and otherwise hindrances that a customer faces when switching from one brand to another within the same industry. However, switching is neither costly nor overly tricky for toothpaste.

You just buy a different brand whenever you like, but you don’t, like a lot of people, ever wondered why? The reason behind this customer loyalty is the “Mouth Marketing,” and the “Generous to consumers” points combined. Through the giveaway, Colgate became a personal experience for the kids as consumers that grew up using the brand to the point where Colgate became the verb that replaced brushing for many. Similar to “Maggi” becoming the product name for “Noodles”.

The taste became something that would be the norm for brushing, and using any other brand with a different taste would just feel jarring. Thus Colgate used something as simple as taste and memory to create a sort of pseudo-addiction to its product that would make the customers stay, and the deviants gravitate back to it.

So this was the story of how Colgate went from a foreign company to becoming a household name synonymous with the entire industry’s name. Share with a friend who you think might benefit from learning a bit more about oral care! 😝

If you liked this story, you might also enjoy another recollection of a company's cunning marketing strategies in Asian Paints is an IT Company!