Investment enthusiasts can’t miss watching this! We were glued to the screen for over 4hrs, and if you couldn’t, worry not. We’ve got you covered.

It’s always been a pleasure watching Buffett & Munger speak wisdom. The immense experience that they’ve got in investing puts them in a comfortable position to make you explore the nooks and corners of the market. Especially for beginners who’re just putting their baby steps into the investing world, they’re hands-down the greatest source of inspiration. Hence, whether it’s Buffett’s annual letters to shareholders or Berkshire’s meetings, you just can’t afford to miss it!

Anyway, before we proceed with some great insights from this meeting, here’s a brief on Berkshire Hathaway.

With a net worth north of half a trillion, Berkshire Hathaway Inc is one of the most valuable companies in the world. It’s a huge American multinational conglomerate that has a hodgepodge of businesses, as in insurance, transportation, utility, retail, manufacturing, etc. It’s headed by its CEO and Chairman, the legendary investor, Warren Buffett, and his right-hand is the Vice-chairman, who’s also another investing wizard, Charlie Munger.

Alongside this nonagenarian duo, the two other vice-chairmen who also chaired the meeting were Greg Abel (who looks after non-insurance business) and Ajit Jain (who looks after insurance). Sounds Indian, right? Well, we bet, (most of) you don’t know this... And that’s something to brag about :)

Anyway, Berkshire Hathaway held its Annual Shareholders Meeting this 1st of May. And for all good reasons, it’s one of the most sought-after events among the investing community worldwide. But, by any chance, if you missed it...

Here’s a simplified explainer on all that you need to know from the legends’ meet.

Investing 101: for the beginners

Times change, extraordinary things happen. Thirty years back, what were the top twenty companies as per market capitalization, don’t even make their way to the list now, not a single one of them! On the same line, a company that, according to you, has good growth prospects in the future may not even exist a few years down the line. Well, it’s quite possible.

Look at the automobile industry, for instance. In the 1900s, when cars were setting their foot into the markets, there were hundreds of car companies that, apparently, seemed to have good growth prospects. But there is only a handful of those companies left now. The rest of them have either shut down or turned bankrupt. And if you’d invested in any of these flops, you’d have lost a fortune!

Well, those days, one could easily visualize thousands of cars rolling on the streets in the upcoming 21st century and thus bet on the car industry, but as Buffett noted, “there is a lot more to picking stocks than to work out which is going to be the most wonderful industry in the future.” And you got to realize this before you become too sure of yourself!

He advised investors NOT to make moral judgments while analyzing businesses. He says that investing in a tobacco business could be much less dangerous than chewing or smoking tobacco. Reminds you of something (ITC), eh?

Here’s another stock-analysis tip from the meet. When analyzing investment companies (like Berkshire), don’t look at their investment gains/losses with much caution. The reason being, that’s the unrealized gain/loss, and even if there is a loss, the company can use its retained earnings to turn around a profit. So, Buffett advises investors to look at the operating gains instead. Thank us later ;-)

Even the legend is wrong at times!

To err is to a human. Mistakes are natural. We, all of us, do. Buffett does. Last year, he sold some 37 million shares of Apple Inc held by Berkshire Hathaway for $11 bn. And considering what an ‘extraordinary business’ they feel Apple is, both Buffett & Munger consider selling its shares as a mistake!

That’s not all. Buffett often quotes, “Be fearful when others are greedy and greedy when others are fearful.” But apparently, he contradicted his own statement last year, when he gave in to fear!

Berkshire Hathaway sold significant investments in four airlines as the industry was trembling due to travel restrictions last year. Buffett justifies this by saying that if Berkshire had remained invested in these airline companies when these companies reached out for financial support from the government, they would have said: ‘take it out of Berkshire’ and thus, would not have bailed these companies out. Hence, it was, in fact, for the benefit of the airline industry. However, on looking back, he admits that they’d have been better off not selling those shares!

Investors can drive home an important message from this. It’s about the ‘Hindsight bias’. Decision & outcome are two different things. Just because the outcome proved to be wrong in hindsight (afterward), that doesn’t mean the decision was wrong in the first place. And vice-versa. So, take decisions, make mistakes, learn from them and improvise your decisions. That’s how it works.

You can’t time the markets!

Berkshire Hathaway is sitting on a huge pile of cash, more than $145.4 Bn (~ 15% of their total assets). You could attribute this to the sheer size of their business. However, as Buffett notes, they didn’t want to depend upon anyone else in times of need. This should give you one note about the importance of emergency funds, which’s become all the more evident in this pandemic.

Anyway, Buffett wanted to deploy about $70-80 billion of the available cash but hasn’t proceeded due to unsupportive valuations. Why, you ask? Well, patience is the key. Period.

Further, on being asked why he didn’t invest heavily during the stock market correction last year, he said that one could never purchase a share at its absolute rock bottom. You can never ever time the markets, whosoever you are.

While Munger expressed his confidence in shares of companies like Berkshire, Buffett claimed that an average joe would be better off investing in index funds, for instance, S&P 500 index & ETFs, rather than in Berkshire’s shares. Whether he wants investors to be risk-savvy or if Berkshire is a saturated company, make of it what you will.

Why invest in big tech companies?

Both Buffett & Munger have always believed good investments to be in those companies that require less asset to conduct a high volume of business. That makes them bullish on Tech companies like Apple, Google, Microsoft, etc.

In contrast to utility companies which also generate good returns, Tech companies flare well because they don’t require much capital investment but do deliver good returns on the capital employed. Buffett hints at the long-term prospects of these IT companies.

He was in all praise of Apple Inc, which also happens to be one of their leading holdings. He emphasizes the brand perception that people have towards Apple products. The reason the company has been the market leader is, basically, its management. Good management can do wonders.

In contrast to this, Buffett says, the most significant risk factor that is not even mentioned in a company’s prospectus is bad management. Investors must consider this bit while analyzing companies.

Are SPACs, Cryptos, and Trading apps all parts of a ‘casino’?

They consider SPACs (companies that raise money and take other companies public asap) as ‘extended versions of gambling’. And Buffett had this to say about SPACs: “It’s a killer! You put a gun on my head and ask to buy a business in two years. I will buy one but don't know how good it will be.” Easy money is driving investors and companies to adopt that route, and hence, Buffett notes that he can’t compete with SPACs in deal-making.

However, investing in SPACs, Cryptos, and through trading apps like Robinhood is no less than betting in a ‘casino’, as Buffett notes: “It creates its own reality for a while, but nobody tells you when the clock strikes 12!”

Munger feels that cryptos are financial products that come ‘out of thin air’. If you ponder for a while, you’ll realize that it, in fact, does. Even he goes to the extent of calling cryptos ‘disgusting’ and trading apps as not being good for society. It might sound somewhat exaggerated, but the inherent message is clear: speculative trading is not a great way to make a fortune. Right?

Ajit also threw light on the importance of pricing the risk in insurance and how the pandemic has made them recalibrate insurance plans to consider the price of such unexpected risks.

To sum everything up, let’s face it guys, investing is, as Buffett quoted, “not as easy as it sounds”. Eh?

Well, now that you have read the legends’ opinion, giving you ours would be like offering ice-cream to Eskimos! So we won’t add much. Let’s end this piece with a quote from Mr. Buffett himself -

Invest in yourself! That generates awesome returns, trust us.

Anyway, what’s one takeaway you would like to drive home from this legends’ meet? We’d love to read your thoughts in the comments below. 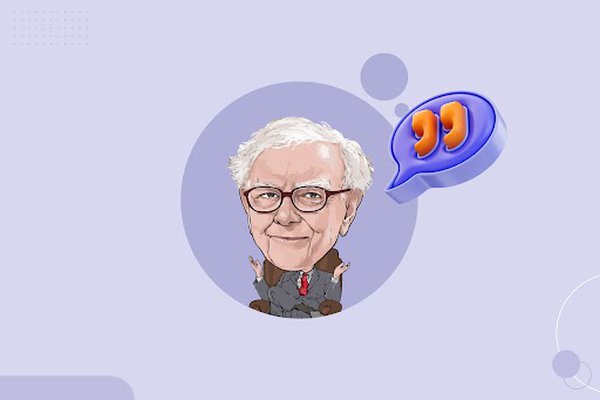