“Buy not on optimism, but on arithmetic” ~Benjamin Graham. This very interesting quote succinctly depicts that even though luck or intuition does have a part to play in stock trading, the major emphasis must be on numbers, that is, on employing various models and techniques to evaluate a stock.

Fundamental analysis and technical analysis are the two major techniques that are used by stock market participants to study and analyse how the stock of a certain company might perform in the long-term & short-term, respectively.

Fundamental analysis deals with studying the economy of a country, the industry and the company. On the other hand, technical analysis deals only with one element, which is, the price of the security. It functions on one principle - “History repeats itself”. So, a technical analysis basically includes the process of studying the past trends of stock price and predicting the future variations. This is done by preparing various kinds of charts.

Of course the most popular of these charts is Candlestick. If you’ve heard the term in the news but don’t exactly understand its nuances, hop in.

What are Candlestick Charts?

A Candlestick chart is a technical analysis chart that shows the price movements of a security on a particular day. But, if we have simple line charts, why do we need these complicated charts?

Well, the line chart is an age-old simple graph with time on the X-axis and prices on the Y-axis. But it suffers from one drawback. For instance, when drawing a weekly chart, the line graph will include only the closing prices of all the days of the week and not the intra-day fluctuations.

To overcome this, traders began to use Candlestick charts. As the name suggests, this type of chart is shaped like a candle that has wicks or shadows. The beauty of this chart is that it graphically represents all the necessary elements. For instance, if we were to draw a week’s candlestick chart, it would include each day’s opening price, that day’s low and high, and the closing price.

The candlestick pattern chart was adopted from the Japanese rich merchants who used this chart to track the daily price levels. Therefore, this is also known as a Japanese candlestick chart.

Typically, candlestick patterns consist of 2 components- a real body and wicks, also known as Tails or Shadows. The two ends of the real body represent the closing and opening prices of the security. The body is red or black coloured if the stock closes at a price lower than the opening. If it closes at a price higher than its opening price, the candle body is coloured in white or green. Depending on the price fluctuations, this basic structure forms various simple and complex patterns that help a trader analyse and predict the market better. Few of the patterns have been described below:

This pattern has an unusually long black or red coloured body with upper and lower tails. It represents a significant difference between the closing and opening prices, wherein the former is lower than the latter. It is considered a bearish pattern. 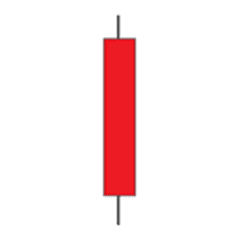 These are similar to the big black candles but in the opposite manner. Meaning that the white or green big candles represent that even though there was volatility during the period, the stock closed at a price way higher than the price it opened at. This is considered bullish. 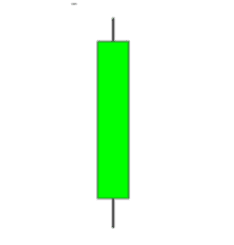 When the closing price and opening prices of a security are almost the same, a Doji pattern is formed. The wicks or tails can vary in length, but the body is hardly present. This trend signifies the existence of indecision in the market. This pattern comes in different kinds like the dragonfly, long-legged, etc, which are signified by the length of the wicks. This pattern has a body near the high, and a long downwards wick. It may or may not have an upper wick. Hammers usually occur as a result of price decline and illustrate that the security was traded at a significantly lower price than the opening, but by the end of the period, managed to close near the opening. This is similar to the hammer, but again, the opposite. Meaning, the body of this candlestick is placed near the low point with a long upward wick. It indicates that the prices moved much higher than the opening price during the day but ultimately closed near the opening price. This is usually found in an upward trend and is considered bearish. In this pattern, only the body is present with neither of the wicks. It depicts price movement in a single direction which means that the stock price closed at the day’s high or low. The former would result in a white or green candle, considered to be bullish and the latter would be considered bearish, consisting of a red or black candle. The stock market is ever-changing with so many factors influencing the trading activity. And for this very reason, the study of the stock market is not very simple. It is a vast ocean of knowledge that requires spending a lot of time and effort. It is fair that many individuals restrain from trading the stock market. Instead, why not play the long game, right? Well, we leave that to you..